New global alliance launched to end AIDS in children by 2030

Globally, only half (52%) of children living with HIV are on life-saving treatment. UNAIDS, UNICEF, and WHO have brought together a new alliance to fix one of the most glaring disparities in the AIDS response. 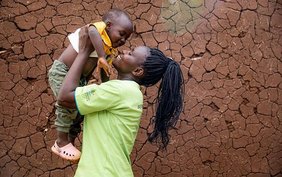 Globally, only half (52%) of children living with HIV are on life-saving treatment, far behind adults where three quarters (76%) are receiving antiretrovirals, according to the data that has just been released in the UNAIDS Global AIDS Update 2022. Concerned by the stalling of progress for children, and the widening gap between children and adults, UNAIDS, UNICEF, WHO and partners have brought together a global alliance to ensure that no child living with HIV is denied treatment by the end of the decade and to prevent new infant HIV infections.

The new Global Alliance for Ending AIDS in Children by 2030 was announced by leading figures at the International AIDS Conference taking place in Montreal, Canada.

In addition to the United Nations agencies, the alliance includes civil society movements, including the Global Network of People living with HIV, national governments in the most affected countries, and international partners, including PEPFAR and the Global Fund. Twelve countries have joined the alliance in the first phase: Angola, Cameroon, Côte d'Ivoire, The Democratic Republic of the Congo (DRC), Kenya, Mozambique, Nigeria, South Africa, Tanzania, Uganda, Zambia, and Zimbabwe.

Consultations by the alliance have identified four pillars for collective action:

Addressing the International AIDS Conference, Limpho Nteko from Lesotho shared how she had discovered she was HIV positive at age 21 while pregnant with her first child. This led her on a journey where she now works for the pioneering women-led mothers2mothers programme. Enabling community leadership, she highlighted, is key to an effective response. (...) END_OF_DOCUMENT_TOKEN_TO_BE_REPLACED