In Niger, girls take their shot at a better future

A girls’ football team is helping break down social barriers, one kick at a time 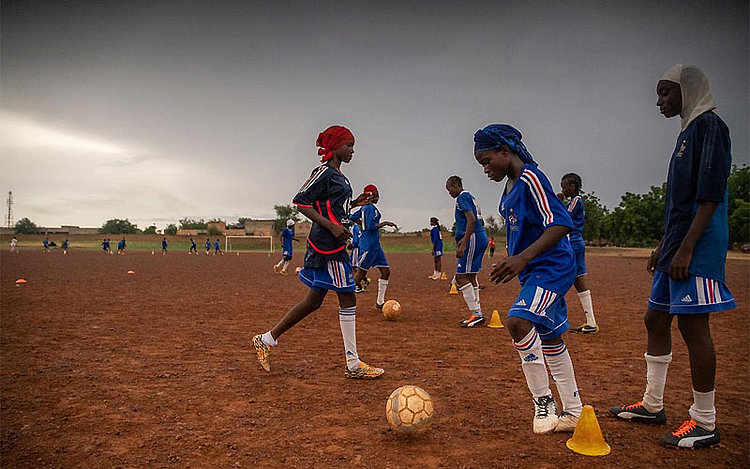 Pascaline (tapping the ball) and her teammates train together on the football pitch at Academie Atcha. © UNICEF/UNI211153/Haro

NIAMEY, Niger – Two beds, a fan, an old television set, a refrigerator. Everything 13-year-old Pascaline’s family owns is squeezed into a space smaller than some people's closet. The walls of the single-room house, which Pascaline shares with her parents, are built with adobe – sun-dried bricks made of clay and straw. The tin roof on their home rattles against the walls whenever there’s a strong gust of wind.

Pascaline lives in Lacouroussou, a poor neighborhood in Niamey, the capital of Niger. Some days, there isn’t anything to eat at home. Work is scarce, and the houses are overcrowded. When it rains, everything gets flooded.

It’s a tough place for children to grow up, but it’s particularly challenging for girls, thousands of whom have seen their childhoods cut short by marriage – Niger has the highest rate of child marriage in the world.

Pascaline’s mother, Biba, chuckles as her daughter talks enthusiastically about her dream of playing football in Spain or the United States. But Pascaline remains defiant: “Whoever says that football is only for boys, well my friends and I are proving them wrong.”

For Pascaline, football is about much more than just fun. When her parents had to take her out of school age eleven because they could no longer afford to pay the school fees, playing football was the only thing that kept her happy.

Henri knows as well as anyone how much his daughter loves the game. “I still remember when she received her first ball, from her uncle,” he says, as he stands outside his welding shop in Niamey. “She played football with the boys in the neighbourhood, and though they’d laugh at her, she didn’t care. She was good at it, and they started to respect that.”

Those skills didn’t just earn Pascaline the respect of her peers – they also helped get her education back on track. When a football school scouted in her neighbourhood, recruiting out-of-school girls to play for a team with the aim of getting them back into class, she studied hard for the entrance exam and was given a spot.

“They gave me a bike, school materials, and a soccer kit to wear for training sessions. My life took a turn I didn’t expect,” she says smiling. (...) END_OF_DOCUMENT_TOKEN_TO_BE_REPLACED