Dreams in a world turned upside down by conflict

As violence in northeast Syria escalated, a mother fled with her daughter to a camp in Iraq. 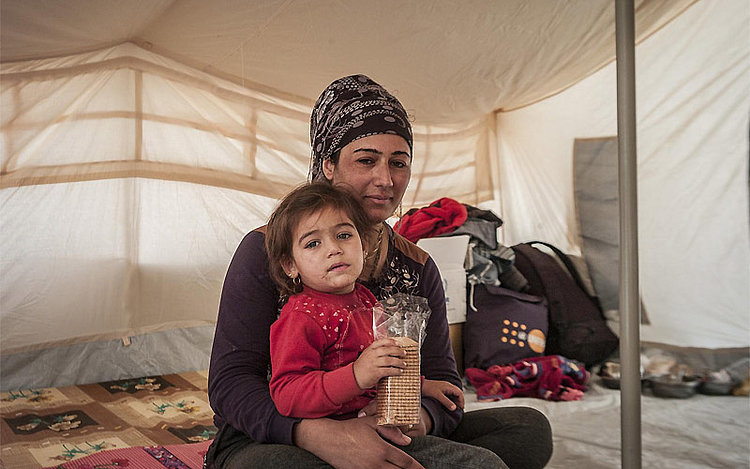 A mother and her daughter sit in a tent in a camp in Iraq. © UNICEF/UNI218756/Simkin

BARDARASH CAMP, Iraq – The rain is falling quietly over Bardarash camp, in northern Iraq, not far from the Syrian border. But the wind whips loudly at the flaps of Kawthar’s tent. A week ago, she had her own home in Syria. Now, this tent is home.

“The airstrikes were happening in front of us, so I picked up my daughter and ran,” says Kawthar, a 25-year-old mother from northeast Syria. “All we could hear was the sound of bombing. We were walking and in front of us there was bombing. Sometimes we would stop and cry, and we wouldn’t know where to go.”

Kawthar and two-year-old Barcham are from the city of Serekaniye, close to the border with Turkey. Like many other families affected by the recent escalation of violence in northeast Syria, Kawthar has already been displaced multiple times.

Kawthar made the difficult decision to flee with her daughter, one of the nearly 4,000 children who fled to Iraq during the recent violence, crossed into the Kurdistan Region of Iraq, and who are now staying in Bardarash camp in Dohuk, in the north of Iraq.  It’s a difficult and risky journey, and Kawthar says Barcham cried most of the way.

“You can’t imagine the situation our kids are in”

Barcham is sitting quietly on her mother’s lap, clutching a packet of biscuits in one hand and reaching up to touch her mother’s cheek with the other. “For her sake, I had to leave,” Kawthar says, looking down at her daughter. “You can’t imagine the situation our kids are in.”

The tent is virtually empty, except for a mattress, a small backpack, and some relief items piled in a corner. Like most families who crossed the border on foot, Kawthar didn’t bring much with her. “I just brought Barcham and three changes of clothes. I put a bag on my back and ran away.”

Humanitarian agencies have provided families with some basic relief items like kitchenware and mattresses, and UNICEF has distributed hygiene kits in the camp. But material assistance is just a part of the response. The violence has cut short childhoods, left children traumatized, and upended their educations.

“Many of the children who are now in Bardarash had just returned to school for the new academic year when the violence started. They’ve had to leave behind everything they know,” says Hamida Lasseko, UNICEF Representative in Iraq, noting that many of the children are in a state of shock when they arrive. “UNICEF is working around the clock to establish basic services in the camp, including education facilities and child-friendly spaces where children can learn and play in safety, as well as receive specialized care for those with specific needs.”

The camp is now full of activity, marked by the regular clanging of shovels as people clear the ground for new tents. A group of young men are outside clearing rubbish and laying out rows of concrete slabs in front of the tents. As the rain turns the ground around the tents into mud, these little porches give children something solid to step on, so they don’t slip and fall as they scramble in and out of the tents.

These are small steps, for now, but mark progress nonetheless. Kawthar says her dreams for her daughter are simple ones, the kind any mother would have.