Child marriage is still very common in Indonesia and is among the most critical in the Province of West Nusa Tenggara. 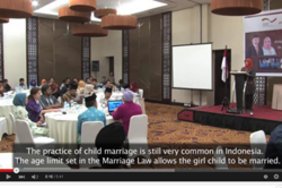 In this Province, in 2012, 5,8 % of the girls under 15 were married while the national rate was 2.6%. The negative consequences of early marriage have been acknowledged. The rates of maternal and infant mortality are still high, as well as domestic violence is. Married at a too early age, girls and boys drop out of school and struggle to sustain themselves economically. Combating early marriage has become a priority, and WNT is the first Indonesian Province to take initiative and innovate to curb underage marriage. With the support of GIZ, a broad coalition of government and civil society actors was fostered, involving community and traditional leaders, women’s organizations, but also youth representatives, a novum in Indonesia. At the occasion of a regional workshop for child marriage prevention, the actors in WNT engage with national stakeholders and reaffirm their joint commitment. As another step in encouraging youth participation, a Provincial Youth Forum is also officially launched. END_OF_DOCUMENT_TOKEN_TO_BE_REPLACED