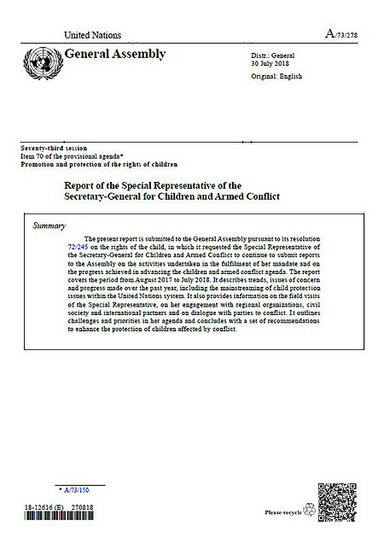 In the past year, protracted conflicts, cyclical spikes in violence and armed forces and armed groups operating across borders further accentuated children’s vulnerabilities in situations of armed conflict where widespread grave violations were documented against boys and girls. These are some of the conclusions of the annual report of the Special Representative of the Secretary-General for Children and Armed Conflict to the UN General Assembly.

“Again this year, children have been confronted to unspeakable violations, but we also see new opportunities to strengthen the international community’s collaboration to end and prevent the use and abuse of children by, in and for armed conflict,” said Virginia Gamba, the Special Representative of the Secretary-General for Children and Armed Conflict.

In her recommendations to the General Assembly, she stressed the importance of ensuring appropriate child protection capacity in situations on the children and armed conflict agenda, and reminded Member States that the reintegration of children is crucial to ensure the sustainability of peace and security. (...)