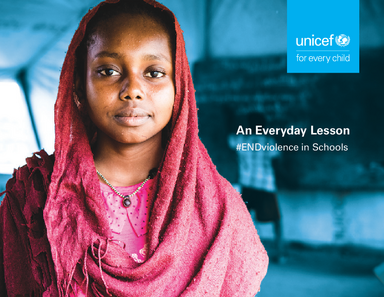 Half of students aged 13 to 15 worldwide – around 150 million – report having experienced peer-to-peer violence in and around school, according to a new report released by UNICEF today.

An Everyday Lesson: #ENDviolence in Schools says that peer violence – measured as the number of children who report having been bullied in the last month or having been involved in a physical fight in the last year – is a pervasive part of young people’s education around the world. It impacts student learning and well-being in rich and poor countries alike.

“Education is the key to building peaceful societies, and yet, for millions of children around the world, school itself is not safe,” said UNICEF Executive Director Henrietta Fore. “Every day, students face multiple dangers, including fighting, pressure to join gangs, bullying – both in person and online, violent discipline, sexual harassment and armed violence. In the short-term this impacts their learning, and in the long-term it can lead to depression, anxiety and even suicide. Violence is an unforgettable lesson that no child needs to learn.”

The report outlines a variety of ways students face violence in and around the classroom.

The report in Arabic, French, Spanish.